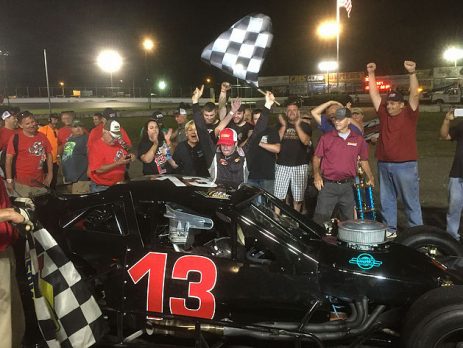 Steve Masse captured his first career NorthEast Race Cars and Parts Tri Track Open Modified Series checkered flag on Thursday at New London-Waterford Speedbowl, rocketing into victory lane behind the wheel of his No. 13 and collecting the big prize of $10,000.

The Bellingham, Massachusetts driver started in fifth position, but was a threat all night long. He pitted early and took a fresh tire, then drove through the entire field and eventually drove around race leader Richard Savary on a lap 88 restart in order to take down his first ever series win.

“I wasn’t sure what was going to happen there at the end,” Masse said. “The heat cycles killed (Richard) Savary’s tires and I was able to get around him. I got a good restart and was able to stay to the outside of him going into turn one — which is important here at Waterford. It all worked out in my favor.”

Masse had decided he was going to step away from the sport at the start of 2016 and spend time with family and friends, but things changed quickly when June came around. Masse felt that urge to go back onto the track and he elected to return to the Speedbowl on Thursday chasing the glory and the big bucks.

“This is only the third race of the year so it feels really good,” Masse said. “Earlier (this year) I just didn’t feel like racing and I didn’t feel like competing. The fire all of a sudden came back and here I am.”

Richard Savary and Mike Holdridge brought the field of 27 modifieds to the green flag Thursday and Savary took command early. Behind him, Masse made early ground from his fifth place starting spot to second and the two drove away from their challengers — brining Rowan Pennink along with them.

The first caution of the event flew on lap 35, when Tommy Barrett spun his No. 44 at the end of the frontstretch and quickly left the scene without damage.  During the yellow, many drivers took advantage of the stoppage and went down pit road — including Masse and Pennink — who gave up top-three runs to make adjustments.

A second caution on lap 35 also slowed the action when Les Hinckley got into the outside wall in turn four, then another yellow flew on lap 49 when Andy Jankowiak spun in turn one. Geoff Gernhard spun on the backstretch on lap 52, drawing a fourth caution of the event while those on the track took advantage and came down pit road. Among those pitting under the caution included Jeff Rocco and Calvin Carroll.

At the lap 52 green, Savary had a tough challenge from Woody Pitkat, who worked the outside and took over the advantage at lap 53.  Just as Pitkat got the lead, Dylan Kopec and Carl Mederios Jr. got together and crashed, allowing Pitkat to hold the bottom for the restart on lap 54. Pitkat held the advantage over Savary until lap 60, when Savary took back command with a bottom line move off turn two.

A pileup in turn one drew a caution on lap 61, then before long Eric Berndt spun from the top-10 down the frontstretch on lap 66.  Cautions also stopped the race on lap 77 and then on lap 88 twice, but the crucial point of the race came on the restart on lap 88.

Savary, — who had been leading much of the race — was on the bottom for the restart but didn’t get the start he needed to hold the advantage. Masse cleared him from the outside and Savary was left chasing him in the final laps, trying everything he could to get back to the bumper.

“We took the strategy of staying out and not pitting at all because we started on the pole,” Savary said. “It was good racing. We weren’t going to give up the track position it was going to be too hard to come from the back. It just came down to a few yellows and Steve having a better tire than us.”

Sitting third at the conclusion of the 100 lap event was Pitkat, who said post-race that he thought he had something for the top-two if the car didn’t tighten up in the final laps.

Pitkat did lead a few laps in the second half of the race, but ultimately, third was the position of finish for the Stebbins Racing driver.

“I led for a little while there,” Pitkat said. “We just got a little bit tight there in the center in the last 40 laps and it just never went away. I tried to do whatever I could to get it to rotate through the center. I’m just happy for my guys. It’s a good momentum builder for us.”

The NorthEast Race Cars Tri Track Open Modified Series returns to action right back at the Speedbowl on Oct. 23 as part of the Bemer’s Big Show weekend, the final race of the 2016 season. Lap sponsorships are available immediately and can be purchased by contacting the series on Facebook or by email.

For more information, fans are encouraged to visit www.tritrackopenmodifiedseries.com. 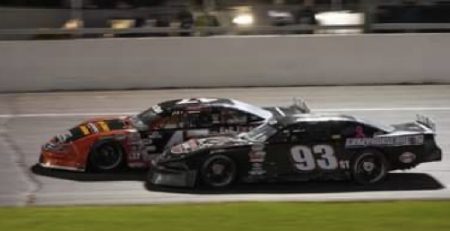 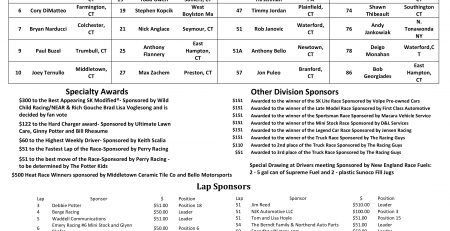 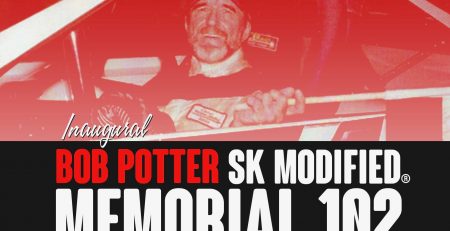 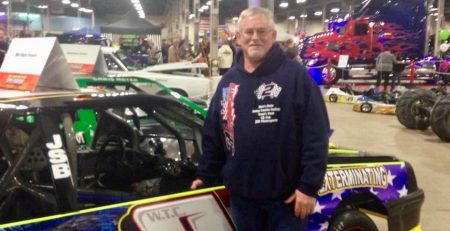 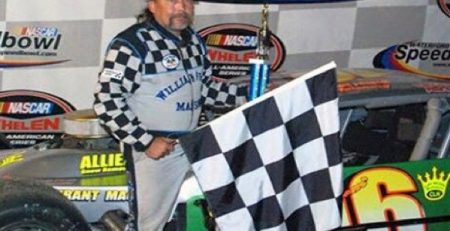 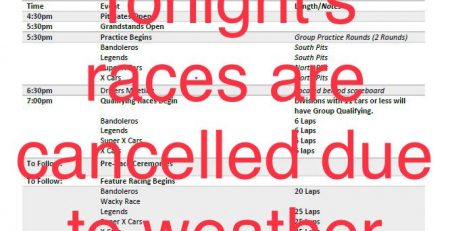 We’d like to begin by thanking all of the race teams who have shown up and competed with us [...]